Are you an IR/polisci/econ major? Are you interested in foreign policy and writing? Do you want to become a pUbLiShEd aUtHoR (looks great on your resume)? If so, Tufts Hemispheres is the place for you! Founded in 1976, Hemispheres: The Tufts University Journal of International Affairs is the oldest publication in the United States committed to publishing distinguished research produced by undergraduate students.
Interested in Star Wars or international relations? Check out Connor Giersch's blog post for an IR-based analysis of the First Order's rise and New Republic's fall. Link in our bio!
We're excited to announce that the winning submissions from the Spring 2021 Blog Contest are now available on our blog! Find the links in our bio. Congratulations again to Veronica Stewart-Frommer, Sarah Stahlman, and Sacha L. Waters!
We’re excited to announce that electronic and print versions of our 2021 journal are now available! Thank you to all of our authors, editors, photographers, and editorialists for your hard work on Coping with Crises. Find the e-version at the link in our bio, and be sure to pick up a physical copy in the coming week at Tisch or the Campus Center.
We’re excited to announce the winners of our blog contest!
Cast your vote for the winners of our blog contest by 11:59 pm on Sunday! Start by watching the trailers in this post, then read the full articles and vote at the link in our bio. Find the article that corresponds to each trailer below! 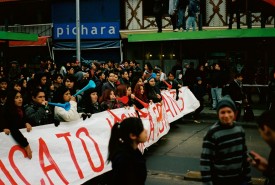 Over the summer, the Louvre Museum housed an exhibition promoting its new branch, the Louvre Abu Dhabi. Among the classical artifacts, Hindu idols, and paintings hailing from all over the world collected for the “birth” of the satellite museum laid a 13th century Qur’an excerpt from Syria. Though the manuscript is foreign to France, it is lucky to be in the hands of the Louvre museum and free from the chaos still dominating its original home. While the Qur’an might have been spared from destruction, the Islamic State of Iraq and the Levant is digging, selling, and obliterating the cultural heritage of Syria.

The Islamic State, or IS, declared their caliphate in the summer of 2014 amid fighting between Bashar-Al-Assad’s Syrian government and opposition forces in the Syrian Civil War. Though IS has many enemies, Western and Muslim, and has been designated by many as a terrorist group, the caliphate has made remarkably more progress in achieving their aims compared to other organizations. This is partly due to overseas financial contributions to their cause and effective recruitment techniques, but also because of the group’s ability to recognize economic demands. Just as the IS have utilized the oil fields of Iraq and Syria, so too have they tapped into the Hellenic and Western artifacts buried in their lands to fuel their expanding theocracy.

While the Islamic State may ban artistic expressions and go so far as to prohibit the use of colored pens in schooling, the supposed caliphate understands the value of art. They may call the works blasphemous, but there is a reason they have systematized their looting and digging operations.  Looting Syrian museums and unearthing other artifacts has allowed the Islamic State to raise millions for their cause. In one site alone, IS managed to sell $36 million worth of ancient artifacts on the black market. Trafficking cultural goods has proven to be a good source of revenue for IS, so much so that even moderate rebel groups and the Assad regime are taking advantage of the plentiful resource to fund their operations.

Unlike the other forces, the Islamic State strictly manages their findings. Locals do all the digging for the artifacts and the state taxes their findings. Islamic art, and especially artifacts with gold, are particularly prized by the caliphate. Large figurines, meanwhile,  are deemed as promoting idolatry and are destroyed by the state. There is significant evidence, however, that IS specifically targets Western audiences. Under the Syrian sands and cities lie important fragments of Western history: Greek sculptures and artifacts from the times of Alexander the Great, Roman works, early Christian iconography, and objects dating back to the crusades. Using the expertise of professional excavators, IS digs in known Classical and Christian archeological sites to discover artifacts for the West.

Slowly these artifacts have reached their destined markets, and the works have found their way in auction houses in London, New York, and Germany. American imports of antiques and works of art from Syria and Iraq between 2012 and 2013 increased 134.3% and 492.4% respectively. Though governments have trouble following these stolen artifacts, there is evidence that the artifacts first make their way to the frontier. From border towns, the artifacts are exchanged for supplies or guns and make their entrance into the black market. Artifacts frequently come through Turkey and Lebanon, but stolen works have been found in most of Syria and Iraq’s neighbors.

Demand for cultural goods is not going away, and despite the rules and laws put in place earlier to stop such trafficking, the looting of Syria’s and Iraq’s treasures is not yielding. Western consumers are still buying Islamic State goods and are aiding in prolonging the conflict in Syria. The Syrian Civil War has already left tremendous damage on the cities and heritage sites of the nation, not to mention the casualties, refugee crises, and economic toll on Syria and the world. The creativity and nation’s narrative is now being exported, and while it is understandable that art takes the backseat in priority given all the horrors war can present, there are grave consequences. If the West allows IS to remove these fragments of history and allows IS  to recreate their own, the terrorist group becomes closer to legitimizing their authority and strengthening their grasp on the people of Iraq and Syria.
Jean-Charles Zurawicki is a freshman who intends to major in International Relations and History.